Reframing Action: What the Latest Research Tells Us About Sexual Harassment at Work

To learn about how we can create safe work environments for all, we sat down with Dr. Chloe Hart, an expert on gender inequality and she studies the impact of sexual harassment in the workplace. 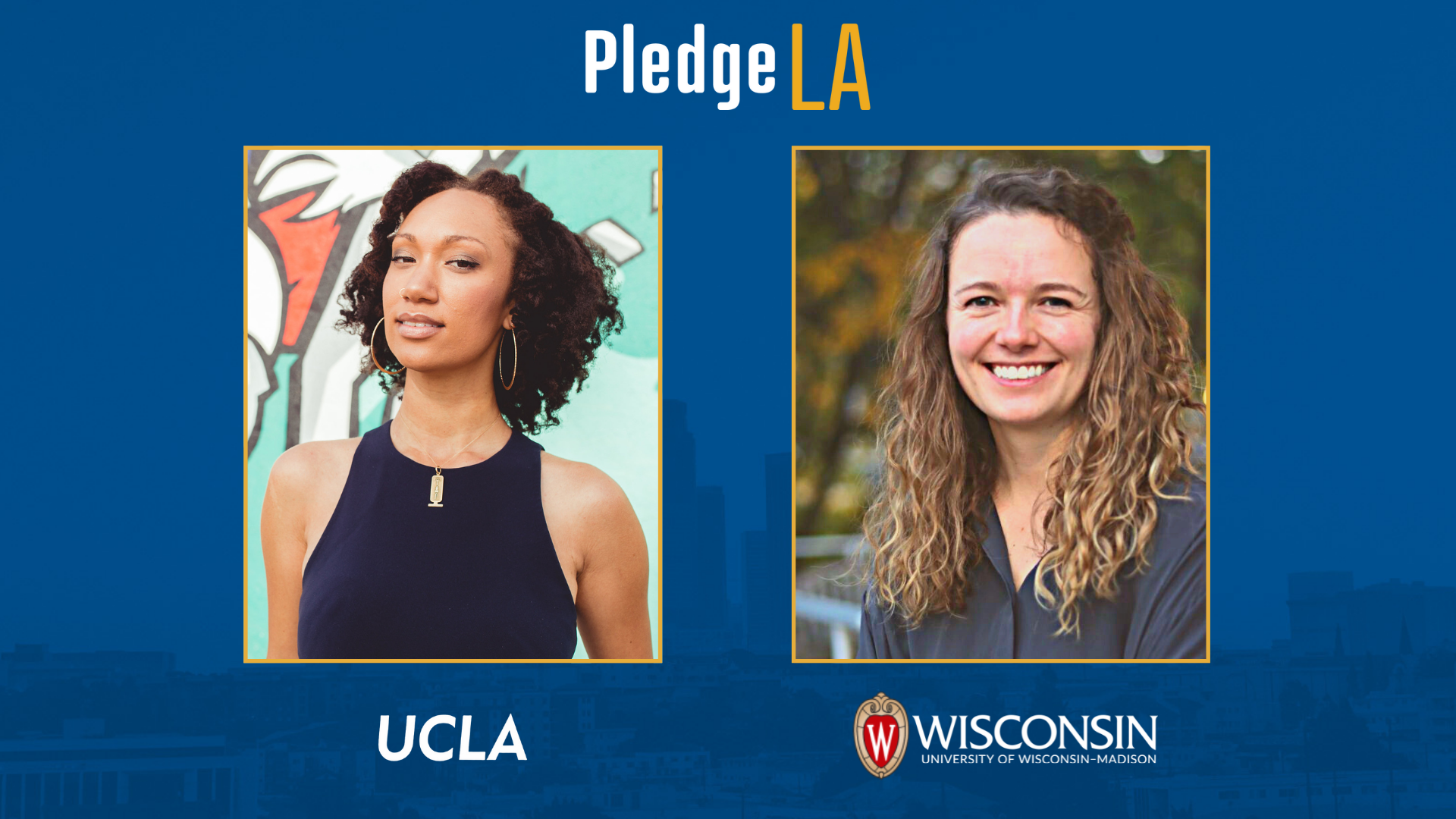 April is Sexual Assault Awareness month, when advocates nationwide raise awareness about how to prevent sexual violence. Unfortunately, workplace sexual harassment is still common but rarely reported. According to studies, over 85 percent of people who experience sexual harassment never file a formal legal charge, and approximately 70 percent of employees never report internally (Feldblum & Lipnic, 2016). As part of  our commitment to create a more inclusive tech ecosystem, PledgeLA is clear that one key component of creating greater equity looks like building safer, harassment-free workplaces where everyone can thrive. To learn about how we can create safe work environments for all, we sat down with Dr. Chloe Hart, an assistant professor of sociology at the University of Wisconsin, Madison. Dr. Hart is an expert on gender inequality and she studies the impact of sexual harassment in the workplace.

We know that sexual harassment can be extremely disruptive to people’s careers — people experiencing it are more likely to abruptly quit a job and experience financial precarity in the aftermath of that. But even if you set aside these arguments,  there’s a strong case that sexual harassment simply hurts the bottom line. It costs companies a lot of money to have their workers distracted at work because they’re being harassed. It’s, of course, costly to litigate sexual harassment, if an employee files a claim. Then there’s also some interesting recent research emerging about the reputational costs for companies that have been known to have engaged in sexual harassment. The research suggests that companies associated with sexual harassment are viewed more negatively. People are less interested in their products and also working there in the future. So for all these reasons, companies should work toward creating safe and harassment-free environments for their employees.

Jasmine Hill: Wow. So what do you say to the leader who might think that because many workplaces are moving online, then we shouldn't have to think about sexual harassment anymore?

Dr. Chloe Hart: We don’t have great numbers on harassment with remote work yet, but, I think it’s important to keep in mind that sexual harassment can occur through online media as well. Sexual harassment includes not only unwanted sexual touching, but also objectifying behaviors or behaviors that convey hostility, exclusion, or second-class status toward members of a gender.

And a lot of this stuff can happen through messaging or video conferencing. I think that the new online paradigm opens up new avenues of harassment that were previously not quite so available. As people are working remotely and holding meetings virtually through platforms like Zoom they are looking into their coworkers’ homes, and so a level of privacy has fallen away. There’s a kind of new intimacy that’s become normalized between coworkers who work remotely. For example, having this look into people’s living spaces can open the door to intrusive questions about who you live with – like whether a person through the background is a partner – which can lead down a path of unwanted inquiries about a person’s intimate relationships.

Jasmine Hill: Excellent point. What can leaders do to reduce sexual harassment?

Dr. Chloe Hart: One of the things that we know matters, is what leaders say and do. We know from studies in the military that the subordinates of leaders who model respectful behavior experience less harassment than the subordinates of leaders who do not. So how a leader acts really sets the tone for how employees act when it comes to sexual harassment.

As another example, a study that I did with Shelly Correll and Allison Crossley at Stanford shows that employees really look to leaders to understand how to interpret a problem like sexual harassment. In the study, we had participants read a short blurb that opened with statistics about an organization’s rates of sexual harassment. At the end of the blurb they’d read a statement from the organization’s leader, saying either “This is a really big deal, we should do something about this,” or something like “Maybe the statistics aren’t ideal, but when you look at other institutions we’re actually not the worst.” What we find is when a leader deflects or minimizes, people think that sexual harassment is, in fact, less of a big deal.

What was interesting about that study is that we also vary the presentation of statistics. Whether we opened with a statistic that conveyed that a lot of people were experiencing sexual harassment, or a statistic that conveyed that the number of people affected was pretty small, that actually didn’t matter at all in whether people thought sexual harassment was a big deal at the organization. This suggests that employees are looking to their leaders to understand how they should make sense of harassment that plays out in their organizations. That tells us that what a leader says about sexual harassment is super important because they are doing that translation work for their employees, whether or not they mean to be doing it.

Jasmine Hill: Fascinating. So beyond the leadership, what are other things you’ve seen in workplaces that are effective or helpful?

Trainings can also have this downside where they can generate a backlash. There’s some research suggesting that after some trainings,  the sorts of people who have a proclivity for sexual harassment actually report more of a likelihood of engaging in harassment after going through training. So providing just any training, without being thoughtful about what’s in that training, isn’t necessarily going to help.

Recently there’s been a push toward Bystander Intervention Training for this reason, and part of the thinking there is that Bystander Intervention training frames everyone who walks into the training as a good person from the start. It’s not accusing people or saying “I think that you’re probably going to harass someone and so that’s why I’m telling you not to do this.” That mentality can generate those backlash effects. Instead, these trainings are framed to convey that we’re all here to try to stop harassment from happening. What can we do together to interrupt harassment of our peers? There’s some evidence that these trainings can be more successful.

Another key piece is the kind of reporting channels available to employees. It’s important that employees feel like they have a safe place to turn when they are experiencing sexual harassment. One thing that’s tricky is that for a range of reasons, people experiencing harassment may not want to report right away. Perhaps they’re not sure whether they can trust their organization to handle it effectively, or they’re worried about retaliation. Perhaps they’re hoping an incident was a one-off thing and it won’t happen again, and they can just move on. But, when employees take a while to report sexual harassment, that’s often treated as a mark against their credibility – if what happened was really so objectionable, the logic goes, why would they wait to report? Research tells us that it’s not unusual to wait to report harassment, and most people experiencing workplace harassment actually never report at all. But people tend to overestimate how assertively they would respond if they experienced sexual harassment, and therefore view people who hesitate with skepticism.

A new area of innovation that helps address this are escrow systems that allow employees to lodge a report confidentially with a third party organization – platforms like Callisto, Vault, or #NotMe. Employees can write up what happened, and they can log it immediately without their company yet being notified. The nice thing about this is if an employee is taking some time to decide on whether they would like to make a formal report with their organization, they can show that they actually did report it, somewhere, at the time that it happened. And, many of these platforms have a way to notify people if someone else filed a harassment report about the same harasser – knowing that they’re not the only one may also encourage and empower people to report.  I’ve written about the challenges in reporting sexual harassment and this format allows the employee to show they did make a report, even if they choose to come forward later.

Jasmine Hill: Thinking about your research on ambiguity, I really appreciated this framework of acknowledging that there is often a gray area employees can feel, where they’re uncomfortable or unsure whether what they’ve experienced is sexual harassment. What can workplaces do to support these kinds of workers who might deal with ambiguous or unwanted interactions?

Sometimes people ask about their coworkers’ partners for completely innocuous reasons – they are just trying to get to know more about the people they work with. But other times, people start with this line of questioning and then steer the conversation to inappropriate areas, like asking their coworker about their sex life with their partner. Let’s say someone has had a coworker in the past ask them about their partner and then steer the conversation down an inappropriate path like this. When a different coworker asks this same person about their partner in the future, they may start to be on guard, worried that this coworker, too, is going to start sexually harassing them.

I heard about similar patterns of harassment unfolding from other ambiguous interactions that at face value seem pretty friendly – like coworkers trying to connect on social media, reaching out over the weekend to talk about non-work related stuff, or hanging around someone’s workstation more than really seemed necessary. Even though these behaviors can sometimes be a form of boundary testing and can escalate into sexual harassment, it’s not helpful to ban them outright. That would be logistically challenging but also patronizing. Many times, behaviors like this are markers of employees forming mutually desired friendships.

Dr. Chloe Hart: I think they exist. I’m not so pessimistic that I think every workplace, all the time, has sexual harassment. I think, though, workplaces that don’t currently have sexual harassment can’t rest easy and assume that they won’t in the future. We know that about 40 percent of women and about 15 percent of men report having experienced unwanted sexual behavior at work – and that statistic is an undercount because it doesn’t include forms of harassment like sexist remarks. This is a widespread problem.

When I think of this ideal workplace that doesn’t have sexual harassment, the hallmark is that employees respect one another, and they respect one another’s boundaries. This is a workplace where people are being mindful not to convey or act on gender-based stereotypes. This is also a workplace where people may be eager to form friendships with their colleagues, but also recognize that their colleagues may have limits on how much of their personal lives they want to bring to work. Maybe this means waiting for your coworker to volunteer personal information – like whether they have a partner – before you go down that conversation path.  Finally, this is a workplace where people recognize that, although they may get a kick out of things like cracking sex jokes around their coworkers, those jokes could make someone they work with feel deeply uncomfortable or disrespected. So it’s not worth it.

This awareness creates the greatest likelihood that people are just able to do their jobs instead of feeling awkward or distracted. In the end, it benefits all of us if the people we work with can focus all their brain power on their work.

Jasmine Hill: That's super helpful. Thank you so much for doing this, I learned a ton from you today.