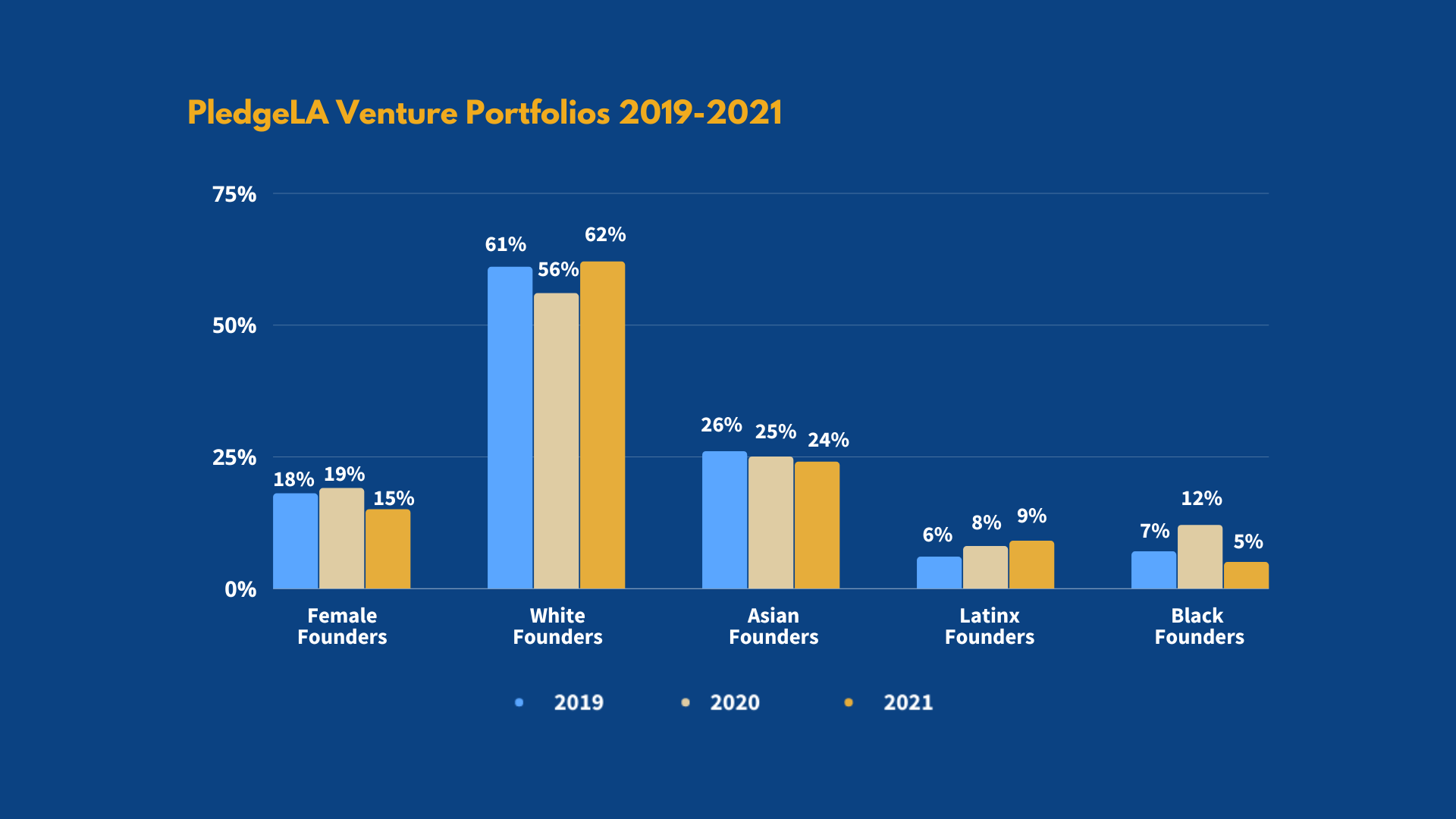 LOS ANGELES – New data out today from AnnenbergTech’s PledgeLA initiative shows that LA-based venture capital firms made fewer investments in 2021 to companies led by women and founders of color when compared with the previous year, with the steepest drop in investments impacting women and women of color. From an analysis of more than 6,300 investment transactions made last year to over 4,400 companies by 67 LA-based venture firms, the following insights emerged:

The report also examines trends in founder investments over three years, finding that women and most founders of color have seen a drop in their share of overall investments, despite minor upticks for some groups in 2020:

The data showed that PledgeLA venture capital firms with a diversity thesis – which is a commitment to focusing their investments on companies led by traditionally underrepresented founders – were 1.75 times more likely to fund women, and 10 times more likely to fund Black Founders. These funds receive 25% of their assets from foundations, unlike traditional VC firms, which only get 6% of their assets from foundations.

Of the VC firms with a diversity thesis, just eight of them contributed 54 percent of all capital invested in teams led by Black and Latinx founders in 2021, around $1.5 billion dollars.

“Despite evidence that women founders return twice the capital and generate more revenue when compared to their male peers[1], this report shows that women – along with founders of color – are being excluded far too often from the innovation economy when it comes to funding,” said Annenberg Foundation Executive Director Cinny Kennard. “In fact, PledgeLA was created to help address this gap and to date, the initiative has awarded more than $875k to 35 Black and Latinx-led startups and helped them raise more than $10 million in follow-on capital.  The latest data on women and women of color proves that we can’t stop now – more firms must work to provide greater access to all founders.”

This is the third annual assessment of diversity and equity within PledgeLA tech and VC member companies. Using public investment data from Pitchbook, algorithmic imputation, and manual review by a research team, PledgeLA coded and analyzed more than 6,300 investments made in 2021. For each transaction, representing more than 4,400 businesses, PledgeLA coded the race, gender, and location of  the founding team and business. This represents the most accurate multi-year study of portfolio diversity in venture investments in the Los Angeles tech ecosystem.

Beyond venture data, PledgeLA has taken additional steps to increase equity in the L.A. tech ecosystem, such as placing more than 60 interns from underrepresented backgrounds in paid roles at local venture firms since 2019. The program not only provides an access point into the venture ecosystem, but gives participants context on which founder segments have – and don’t have – access to capital. Alumni from this program now hold full-time roles at venture firms like the Dorm Room Fund, Slauson & Co., Upfront Ventures, and VamosVentures. As rising leaders in venture, these alumni can play an important role in influencing investment decisions in years to come.

PledgeLA is a coalition of more than 200 LA venture capital firms and tech companies working to increase equity, community engagement, and accountability among LA companies.